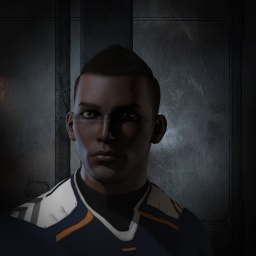 “Hey there, sorry I burned the nose hairs off your sensors.”

Eisen Wor’sha never deviated from a script he perfected shortly after he flew his first cruiser.  He would always shortstream his semi-famous, smiling face into the Customs Office that ordered him to stop.  Usually that was enough to get him through whatever reservations the Federation’s outsourced help had in letting him through a lightly regulated part of Gallente space.

This crew, unfortunately, directed him to dock at a nearby station so his craft could be thoroughly searched.  Eisen’s rarely-creased face grew a few cracks around his mouth, his brow shortened a few inches, and his face molded into concern.

Like a rookie pilot, Eisen awkwardly docked his cruiser into an elegant and clean Gallente Federation Customs station.  He did a mental check of all the things he needed to hide and replayed how he would respond to any and all questions.

To mask his real cargo, Eisen smeared fedo blood all over the concealed compartment near his ship’s kitchen.  If asked about it, he went with the line, “I was dating a really bad cook.”

Fedo blood had this unique property in that it completely absorbed a lot of wave energy and thus fooled the cheap sensor technology the Federation used in low security space.

But up here in “high sec,” he was taking a chance.

“Whoa, I’m sorry – was I not in compliance?”  Eisen veered into his most domesticated voice and tone possible.

The Federation Customs officer, Micheal Dannet by his name-tag, gave Eisen a sidelong sneer as he passed through the kitchen area and took note of the blood.

After several long minutes of watching Dannet glance around with his handheld sniffer, Eisen couldn’t help himself and asked, “Do you even know what the fuck you’re looking for?”

The best part of the Customs Operational Branch, COB as they insisted on being called, was their complete lack of competence.  You could paste a brick of CRYTOline the front of your ship and the Federation would never be the wiser.

“You know you’re not supposed to do this sort of thing, right?” the low-ranking inspector asked.

“Why?  I sell the meat at various ports,” was his quick response.  This was not going according to script.

There was a long pause as Officer Dannet paced around looking at the blood and the area around it.  He checked his sniffer, pulled out a datapad, and started what looked to be the documentation process of a violation.

Eisen was getting nervous.

“What are you doing?  Look, I’ve got some spare Kreds I don’t need if you’ll just not cite me.  I hate dings on my manifests whenever I register transports.”

The Customs officer stopped punching keys with his thumbs and stared directly into the center of Eisen’s eyes.

“Oh, no.  This isn’t about money.  As soon as I heard you were coming through, I started imagining this situation and what I would do if you really came through my port,” said the officer, slowly putting his datapad away.

Now Eisen was getting really nervous.

Calmly, Officer Dannet said, “That hit you laid on LoCain was the most vicious hit I’ve ever seen.”

Immediately Eisen, the former replacement throwing-back for the Dodixie Blue Helms, relaxed.  So the duty-freak officer did recognize him and the equation changed.

Fame delivered Eisen from above-average scrutiny and trouble since he had played for one of the more hallowed franchises in the Gallente Federation.  And the hit this Customs Officer was referring to was on a defensive player who intercepted one of his two professional throws in his career.  He felt like he had just run into a warping freighter but it jarred the ball loose and another offensive player won the game, and a Championship, with the recovery.

It was one of the wildest finishes in the history of the sport and was worth more than the most precious of metals in New Eden.  It got Eisen into any club, restaurant, women’s vaginas, and always past security.

Oh shit.  This had never happened before.  LoCain had a following but he retired immediately after the game and killed himself five days later.

But this was a problem the paranoid side of Eisen always contemplated and yet managed to smother with probability and logic.  After all, LoCain hung himself and that story saw its last, sad page.

Federal Customs Officer Michael Dannet was that .005% chance that the former Cyberball-star dreaded.  The crazed fans that he had encountered in the past, all seventeen of them, had been held in check by whatever security presence the location provided.  Never had one of them been an agent of the Federation’s institutional corporations.

Dannet went for his sidearm, an exotic Caldari pistol designed to expand space in a target’s body so that the organs would go into immediate shock.  It was like blowing five inch bubbles into a human body at random points.

Eisen’s reactions were instinctual and aided by all the wetware and enhanced circuitry leftover from his playing days.

In under two seconds, the Customs Officer with a juvenile devotion to a suicidal failure of an athelete had his trachea crushed by a metallic forearm and most of his right side collapsed by a completely replaced cybernetic leg.  That dull, tarp-slap and sharp plastic-crack was something Eisen thought he was done hearing, but every year he got at least one more reminder.

With blood rushing from his mouth and a lot more hemorrhaging inside his body, the last words of Officer Dannet spoke were, “Fuck you, Wor’sha.”

That’s the moment Eisen’s life changed.  There was no way around murdering an officer, of any kind, of the Gallente Federation.  Self-defense would keep him from losing life and all of his property, but he would definitely see the rest of his good years in stasis or sharing quarters with another murderer.

“FUUUUUUUUUUUUUUUUUUUCK!!!” Eisen screamed as he collapsed to his knees in a heap, crying.  His life of comfort, the social circles he knew and thoroughly reveled in, were gone.

Eisen went through the cycle of grief a few times before he stood up and kicked the recognizability out of the Federal Customs Officer, making sure there were only a few unbroken bones in the uniformed husk that resembled a corpse.

Eisen Wor’sha called out to his ship’s onboard computer, “Candice.  Establish a connection with Gabrielle Reeve or her surrogate and put her on the front comm.”