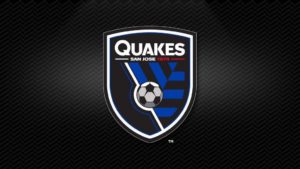 A large crowd, undeterred by a second case of COVID-19 in Santa Clara County, assembled to watch the San Jose Earthquakes kick off the 2020 season in San Jose, California.  Avaya Stadium sold out with official attendance at 17,814.

A chilling wind was blowing south and had me shivering by 3pm no matter where I stood with my “Standing Room Only” ticket.  The players on the field noticeably kept their passes low when going north.  I feel proud of myself for being able to make this observation since I know dick about the sport.

As I was wandering around the stadium, I caught a whiff of a very unsettling combination of incense and barbecue.  I didn’t know what to make of it so I quickly bought two beers for $26 and double-fisted the olfactory memory away.  Luckily I was able to find some cheap parking on the floor for these tallboys because my hands were freezing along with the rest of my body.

Early play was conservative with the Earthquakes giving the appearance that they were afraid to make mistakes.  By halftime, I tweeted the team to take more shots hoping someone from the social media department would send it down to the coaching staff.

The opportunistic Toronto FC scored two goals, one by a penalty kick on a bullshit call, and the other on an attack that looked way too easy for them.  San Jose quickly responded to the second goal with a beaut by Alex Rios, an ankle deflection that put the score at 2 – 1.

That score remained until the final minute of stoppage time when Oswaldo Alanis, a loaner from the Mexican club Guadalajara, put a free kick into the back of the net to absolutely stun Toronto and end the game in a draw.

Some of the commentary later described San Jose’s performance as underwhelming and I have to agree.  Toronto looked in control despite having the ball only 37% of the time.  The crowd freaking loved it though and I was definitely cheering with a huge smile on my face.  An urge to run around pointing like I had just scored the goal myself did shoot through my brain.

I have one gripe about what was otherwise a great fan experience: POS terminal failures which resulted in cash-only stands and excessive ATM fees.  ATM fees trigger me and I see red for about 2 full minutes before agreeing to pay an extra $3 for my 20 dollar bills.

The monetary tally for this adventure is as follows:

We’ll be back on March 21st to see the Quakes take on Sporting Kansas City, a team that looked extremely good this past weekend.