A Charr recruit, young with a dark brown coat of fur highlighted by white stripes along his chin and brow, sized up the well-geared, straight-backed elementalist wearing a superior officer’s insignia on his right breast.

“Sir, it’s – how do I say in your dialect – rare … I think … that we see a Tactician along these routes.  Between the Keep, along these Hills, and to the Ascalonians in their settleplace to the west, we do not require your experts.”

Eisen nodded politely and responded, “Do not think too hard on this, Recruit.  And don’t suspect what is strapped on that dolyak’s back to be of any greater significance than the food and payment we take to them,” using gestures to clarify any gaps in language.

It was a courtesy from the Vigil, with their Asuran gate delivering reinforcements and supplies to the Orrian continent, to guard those routes and bring coin to the refugees who fed those far off soldiers.  A portion of the raw meats and farmed goods that was cooked and prepared at Vigil Keep was returned to the Ascalonians in the middle of the Gendarran Fields.  With bandits and centaurs everywhere in these lands, additional swords and staves were always welcomed by the Seraph.

Eisen of Zek, the latter part of his name identifying which Vigil regiment he belonged to, kept his eyes on the horizon as he walked slowly next to his assigned dolyak.  The escort and carriage train made slow and steady gains on the road throughout the afternoon.

The ranking commander of the escort was a raven-haired human woman with the traditional centaur’s haircut, a braid of her topmost hair pony-tailing down her back with the sides and back of her head shaved clean.  Scars lined her arms and she rode a chestnut stallion because of a permanent limp.  War had claimed one of her feet.

“I appreciate you being among us but I share Recruit Soilmane’s curiosity.  Do you have relatives in Ascalon?” asked the Crusader.

Eisen smiled but gave the distance ahead a wan look.  He replied, “No, Crusader Vaughn, I do not have family in any city besides the ones I serve with during the course of my duty.  The only brother I had died serving the Pact in Orr.”

“I’m sorry for your loss,” was her careful, delayed response.

Eisen’s sad, defeated look continued to cast its gaze out at the land before them.  “The wrong man died that day.  And the worst was yet to come,” he said.

Several Recruits had slowly came closer over the last few miles and he felt their interested looks as easily as he did the light rain on his skin.  Eisen exhaled wearily and began:

“We grew up together within Salma in the Reach.  Both of us were orphans.  Whispers only of our time before memory and what happened to our families.  Heavy centaur activity in the regions we were from.  Maybe a new settlement that was raided fiercely by the Tamini and Harathi, with Modniir support, who laid claim to the area.  Organized warriors are a scary thing.

Gavi was better at ‘Round Ball’ of course.  Him the swordsman and me the … gifted.  We played so joyfully with the quaggans at the Fountain, forgetting the daily sadness we sometimes suffered through. We often found mischief to chase that away. 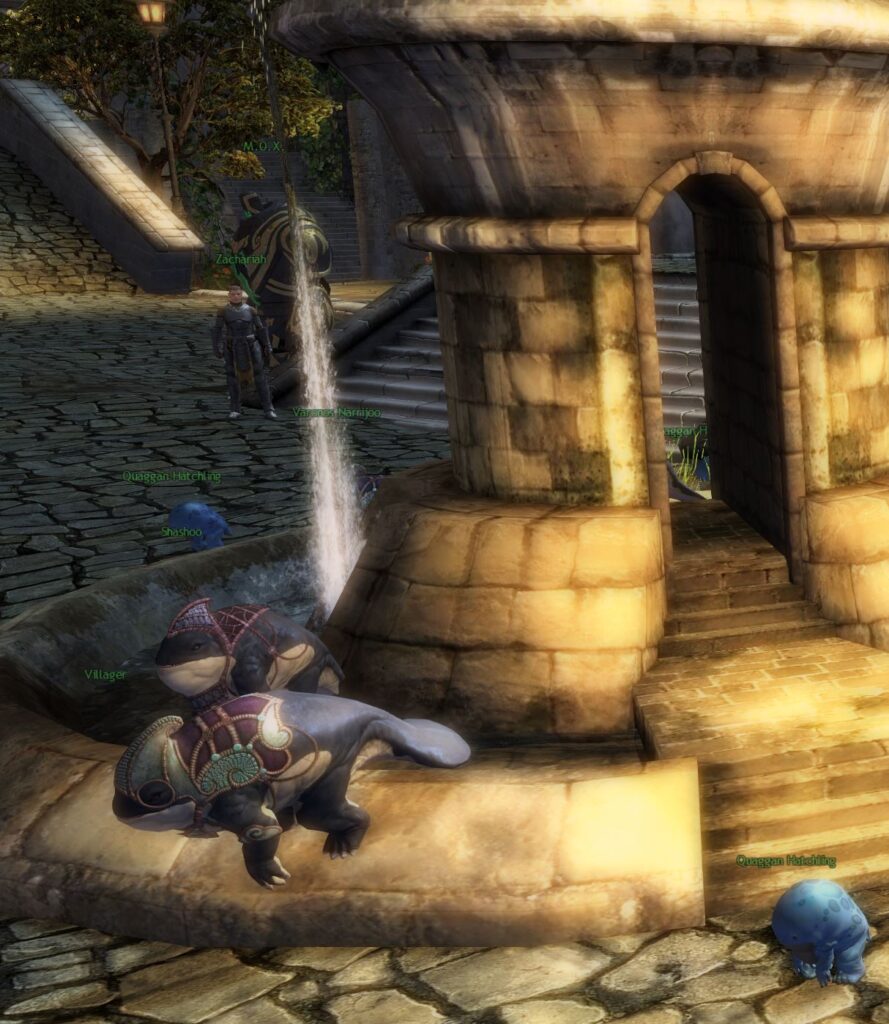 Once we sneaked into Rook’s Row, wearing some clothes of the men for whom we did the washing over at the Vanguard Hospital.  Without coin, we didn’t last long but Ol’ Hamming had no clue as to our lack of seasons.  It was all Gavi’s swagger, his carry.

We did our duty to the Priests of Dwayna who raised us.  We cleaned the Vanguard Hospital and helped however we could.  We saw all the blood and pain not meant for a child’s eyes … but as Deacon Lans said, ‘Open eyes learn the world is not a safe place.’  A needed lesson in his mind, one most children skip.

It was there in that Hospital that Gavi promised a dying soldier he would join the Seraph and convinced me to do the same. We were ‘destined’ to defend good folk against the ‘Hooves’ as we once called the centaurs.

During our time at the Hospital, my awareness of magic grew.  I found a weapon of my preference and filled the void with mage-training from the Priests. Gavi began his path with a blade as soon as he was allowed.  He had picked up a lot from bedridden soldiers recovering in the sweaty, blood-stained cots.

We were recruited by the Seraph as soon as they learned of our background and interest.  That we were trained already put us on the lines quicker than the others our age.  Our education began in our mid-teens, still unseasoned by anything outside the gates of Divinity’s Reach.

Life as a Seraph was hard.  We fought the Hooves – day in, day out – but rarely killing each other.  Skirmishes where the slow and brave were culled.  We patrolled around the edges of this current route and saw the glint and shine of those armored by the Vigil.

Gavi and I joined ‘Zek Company’ of the Vigil as soon as our contracts with the Seraph were fulfilled.

Only months in we were sent to Orr where we learned of thickly-caked blood, charred yet frozen flesh, the rot of the Risen’s breath, cold nights in fetid swamps, and the long, lonely marches to and from the frontlines of battle.  This is where we became men and women.  Our childhoods finished the day we landed on that once-sunk continent.

We lost a massive fight along the shore several months into our deployment, the attacking Risen wizards were unmatched in ferocity and malevolent energy.  An Elder Dragon’s hatred crackled off their bodies.  So many of our brothers and sisters that night were killed by the rusted, dulled, and soulless weapons of Risen infrantrymen. 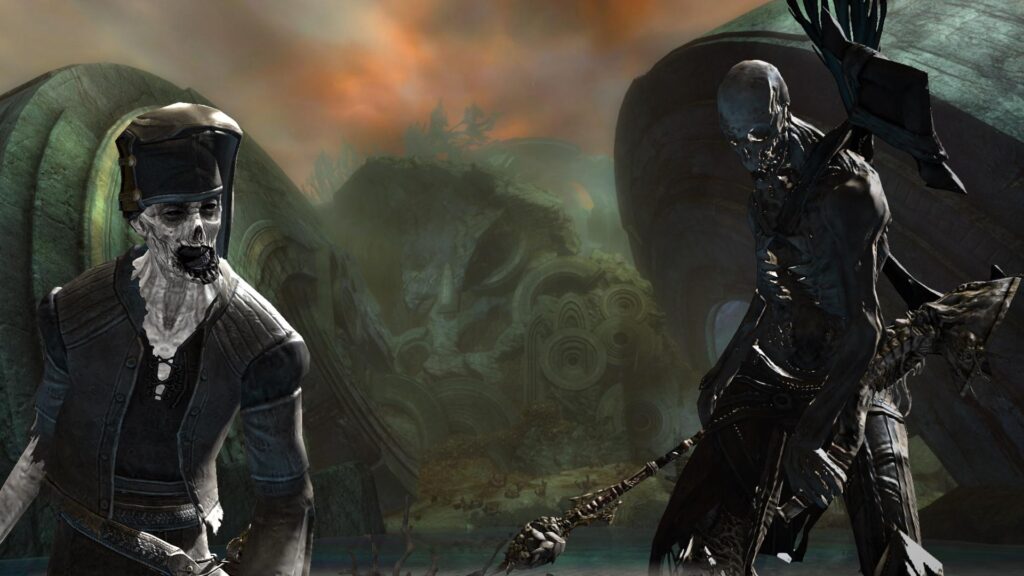 Gavi fell, the determined and tremendous swordsman I had known my whole life, cut down by unthinking bones and corrupted bodies in the defense of his fellow Tyrians much like those that came before us. The ones that inspired him in hospital beds, bleeding in body and heart.

If that were the end of the tale, we could all raise our mugs and toast to his memory in the Keep.  But I have more to share.

Before my grief could wane, we faced him during our retreat.  So quickly had he joined the ranks of the undead I didn’t recognize him at first.  Already his skin was sagging by the weight of undeath and took the pallor of the moon and soaking sea.

But Gavi’s sharp and motivated technique was there.  His highly-skilled slashes took down many, especially those who hesitated to raise a defense.  Some spoke later of being confused about why our own man had turned on us so insidious is the seed of the Risen.

Do not hold back against the fallen, Recruits.  They are no longer who they once were.  The brother or sister you knew is gone, their soul hopefully already in the Mists.  If you do not return their fury, you will die by their rotting hands.”

Eisen of Zek felt the defeaning silence and knew all eyes were on his lips as he felt moisture covering his eyes.  The tired soldier inhaled and breathed out slowly. 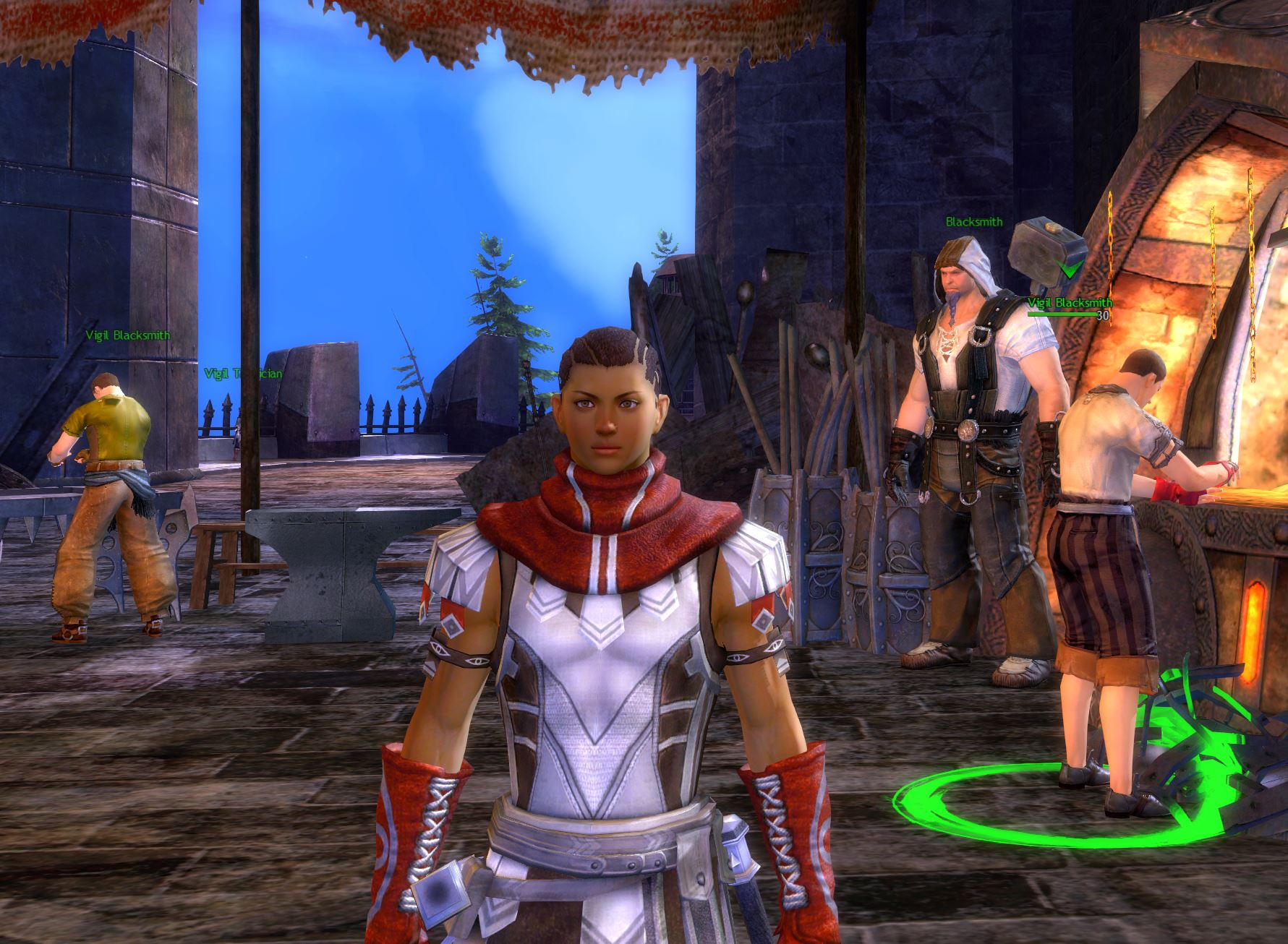